Evil Homer is a very meticulous player.  That can be annoying, as he'll take five minutes to think out the move we both know he's going to make... but that's minor crap.

His habits of marking his units as they've activated is something EVERYONE should do. 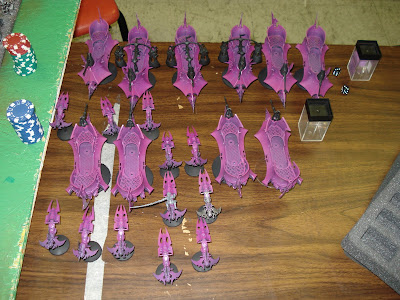 (Yea, I meant to yell.)  Moving on, Evil Homer's armies are Multiple Small Unit builds, so with 7 loaded Raiders, 3 Ravagers, and 3 Units of Jetbikes, the Shooting Phase can get complicated quick. 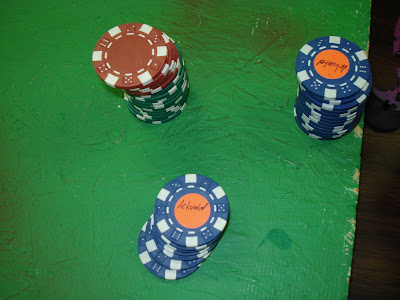 Why?  Because the Raiders are loaded - in many cases, something is firing out of the vehicle.  Instead of relying on his memory, he'll use these poker chips and set them next to the unit.  The loaded Raiders, for instance, will end up with two chips next to them by the end of the phase. 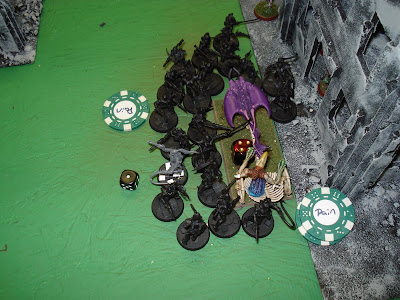 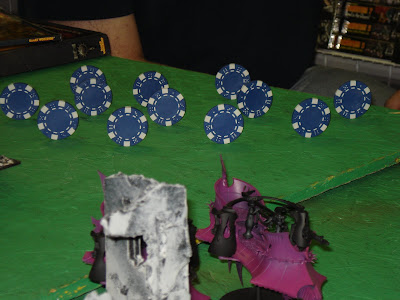 ...and Farseer Tim used them to relieve some boredom at one point during the game.

As a tournament player, I've played I-don't-know-how-many Mech Guard armies - and I'm here to tell you that a number of those screwed up their shooting phase at some point.

Dice?  You mark your units with dice?  Not a good idea!  You roll dice - you're going to pick them up at some point - count on it!  Then we'll end up arguing over whether you were Shaken or not.

Mark your units, all you MSU players. :)
Who's At Fault? Brent

Absolutely fantastic suggestions. I need to get me some poker chips post haste.

Heya Brent!
I have a set of 'Marker Drones' I used for my Tau army (markerlights and units that can shoot at multiple targets...ugh- it's messy so I know what you mean).
Seeing this piece, I'm thinking of doing some 'Ripper Markers' for my 'Nids to represent Psyker Powers and whatnot.

Btw, Brent- I cannot begin to express my disappointment of you dropping Tyranids to play....Space Wolves.

If ANYBODY could've helped Tyranids gain a popularity point, it would've been you, Brent.
This hurts....

And to drop them for....that army?
Friggin' kidney punch, bro....fer reals.
I thought you were a bit more rebellious, a bit more 'against the grain.'
Now....I dunno, dude- you drop 'Nids cuz youre little list didn't work out?
And you pick up...them....just to win at events? Is THAT what it's all about? Really?

'Nids have done alright at a lot of Tournaments- and you're the guy that shows people up with DAEMONS, right?
It's like you didn't even TRY....

Great idea. I'm going to have to grab a set of poker chips.

Might as well mark them for vehicle results too.

I actually have been doing the same thing for my pain tokens. I may start using other chips for my raiders and ravagers as well. I took chips spray painted them black then used sticker paper you can send through the printer and printed off picture and "Feel No Pain"..etc on them

Of course he did! Have you actually played Tyranids? Until they change something they are no fun to play. Space Wolves are great fun to play, have a wide variety of army types, and are much better than ANY tyranid build you can make.

Space Wolves blow dogs for nickels...but at least they are getting shown up by those Tin-Knights

Da Warboss, You and I don't agree on anything. I play both Grey Knights and Space Wolves, and they can beat each other soundly. One is not stronger than the other yet!

Oh really? Maybe you haven't been hearing how Grey knights both out-shoot and out melee the Mutts hands down, especially if you are not forced to take long fangs missile spam. 'Nids had a hard time vs this spam...they are completely helpless vs Purifying Flame for the horde followed up by force weapons insta-killing the big bugs. Why do i not find it surprising you touting the 'merits' of the wolves and Grey Knights. Sure, its fun playing them, they both have a monstrous edge.