First things first; I genuinely appreciate the comments and emails I received yesterday.  Sincerely, thank you!  It was great to get the mail-tone on the phone, because I could check the mobile and take a few seconds to relax.

It helped to feel connected to the world outside the hospital.

The important news is my father is now the Miracle Man.  I didn't mention it yesterday, because it was bad bad bad.

Like Not Brent.  Not just bad beans, but bad news. 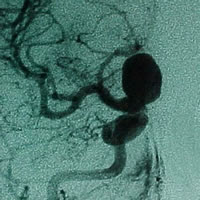 The Miracle Man had an aneurism at the left anterior pons, basically under the Cerebellum.  That's a bleeder, folks, and when the thing goes it's a coin flip whether you drop dead on the spot.  Even after, the prognosis isn't good.

In our case, the major issue is the area isn't that accessible to surgery, which naturally has complications of its own.  We had one of the few Radiologists in the country who could perform the coiling procedure during the angiogram.  Dr. Gerstle was amazing; we all felt lucky to have him.

I won't go into detail that's already out there in glorious detail, HERE and HERE. 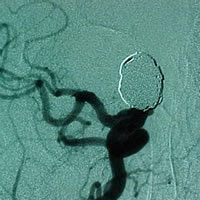 So... imagine the best news, news too good to hope for.  That's what we got.

He's still in pain and in the ICU, but he'll be home in a few weeks.  The prognosis is excellent... and unexpected.

This was bad - about as bad as it can be for a trip to the ER.  I needed a few outlets, so thanks for that.
Who's At Fault? Brent

Wow Brent, that's really good news. Most victims of that go into comas (and rarely even wake up). I'm so glad that our prayers were heard.

Great news, Brent. I wish your Father a speedy recovery. Now, get some rest. I'm sure you need it.

Awesome stuff, agree with CRP, go get some rest!

I think CRP said everything we can say. The best wishes for you.

I hope you don't mind me posting, as I don't know you but follow your blog....just wanted to say I am happy for your news and wish you all the very best.

@Gauthic: I worked about three years at Neurology ICU ten years ago. We had lot of clients with aneurysm, which was solved by angiography. Coma is not a normal course. Risk of aneurysm is, that will crack and bleed into the brain. Especially at areas of brain where invasive solution (surgery sucking blood out) is impossible. Then it really ends coma or death, typically brain death, non invasive therapy is not radical.

But yeah, angio is very cool technology. It is safer than traditional surgery, do not need long recovery time, can reach areas which is not accessible by surgery. Angio is used also for treatment of heart attacks and vascular problems.

It is good to hear the good news, Brent. Prays for you and your family.

This is a piece of secrecy. Explains how to use the law of attraction for health care. Not a movie, or a lie.

Excellent news! Echo all the others, get some rest brother

Like all the others say get some rest man!

Great news man. This plus seeing that guy get pulled out from under the car with the burning motorcycle made my week.

I work on an ambulance service and I needed some good news this week. It was a bad week for calls for us.

Great to here all is well. I hope for a speedy recovery for your dad, you and your family. You've all been through quite an ordeal.

Thanks for sharing the good news, Brent. Glad to hear your father made it through such a scary experience, I hope he has a fast recovery and will get to go home soon.

Congrats on the great news.
Here is wishing him a speedy recovery.

Good to hear. My old man was busting rocks with a sledgehammer one day, had heart surgery the next, never came outta the coma due to some plaque traveling up instead of down. Glad things are going better 4 u.

I'm so happy to hear he is ok, Aneurysms are so rough, your right, it is a coin flip. I'm happy that you found a good doctor who was able to save him and deal with this issue properly. Best of luck to you and your family and I hope He gets better.

Thanks for sharing us man!Take some rest man.

Brett, always tricky from one image but, I think you might need to buy that nice Dr. Gerstle chap a cigar and a thank you card. That is a great result on a particularly difficult looking aneurysm.

Really glad your Dad is walking away from this one. Good luck to you and him.

Brent
My prayers for a speedy recovery I can emphasize with your predicament. Three years ago I went lights and sirens to my house to walk in the door watching my colleagues work on mu=y wife in cardiac arrest. Three ablations and an abdominal surgery later she still has problems but we are managing glad to hear the great news hang in there.
Greg

Cheers, Brent--glad things went as well as they did!

I realize I'm a bit late, but I'm glad to hear your father is doing well!