It's important never to rest on an idea, which brings me to this army list.  I played an won Round I with Daemons, but currently I intend to take the Brotherhood to Round II - for a variety of reasons.

Still, applying my concerns about what I may have to face brought me to this army list. 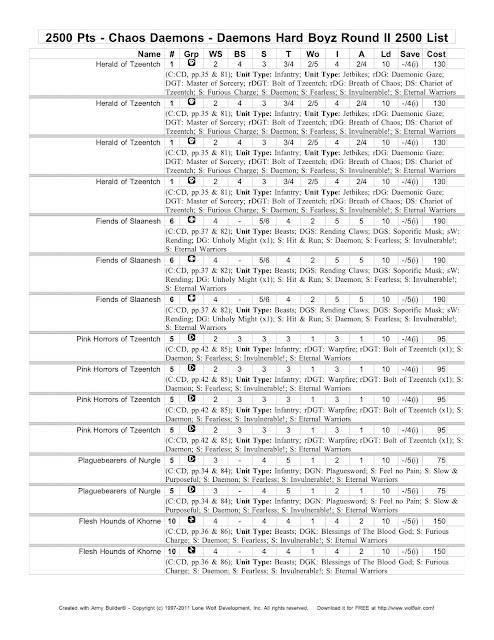 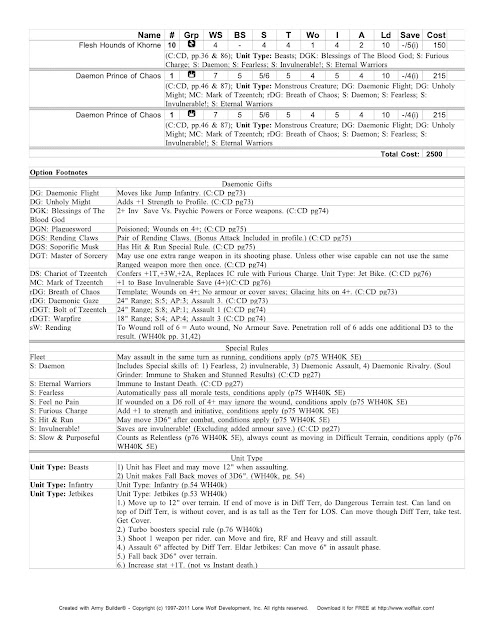 (Comments?  Hugs and gropings?  He's getting predictable.)
Who's At Fault? Brent

Email ThisBlogThis!Share to TwitterShare to FacebookShare to Pinterest
Labels: Demons

I like it. I'm glad you opted to go for 2 Daemon Princes instead of 3 and reduced number of Flesh Hounds. I don't think much can be done to improve the list, being 2500 points. I'll be interested to see how your testing goes with the list.

I'm not convinced that this list is any better than the previous one. You gain two maneuverable close combat units which is nice, but I think you have to give up too much to get them. You're down three bolts from the last list which could rather hurt against massed mech armies which are still extremely popular in my area at least. You also lose the changeling, which is one of the coolest five point upgrades in the game, and the large tarpit unit of plaguebearers you had previously, which I've had great luck with in all the games I've used them in.

I feel like I need more information though. What are you expecting to face and what role do you expect the altered units to perform?

Personally, I think three tzeentch princes with bolt is better than the two with the upgrades. I suppose it's slightly less useful against vehicles in combat and losing breath is painful, but you do have 4 heralds with it. That also leaves 10 points to do with as you please - perhaps the Changeling in one unit?

I think you are going to miss prince #3 but what do I know.

My empire for an edit button...sigh...

Why the hell are you taking your brotherhood instead of your demons? This makes little sense to me.

Demons is the army you are best with. Learn to really play the brotherhood before taking it out of town...

Bye the way, I'm in negiotiations to rebuild my Guard army. If you win, and choose Guard, let me know we can work something out on that other thing if you want.

I don't know that this list is any better than the last. I actually really liked the tarpit Plaguebearers unit with the Icon, and though I've always maintained an Icon isn't necessary to a skilled Daemons player it is very useful to have on a crowded board.

I'd take the Changeling if I had the five points, but in this build it's just not there.

Almost immediately after posting this I thought, "Er, Bolt probably is better than Breath on the Daemon Princes..." Still, my rationale is (was) that this unit would run in the Shooting Phase if it wasn't able to charge something. Breath is ever-helpful for a unit that plays up close and personal, and it's equally effective against infantry and tanks...

...why? Because though its awesome against infantry, a 50% glance chance is nothing to sniff at. In the parking lot games of 5th edition, I'm usually able to pick up two tanks.

The idea I'm playing with - the flying DP - has potential, I think - and a very specific purpose it does better than anything else in the army.

Bretn, list seems fine, but with exceptions - Daemon Prices. DPs in your list are really expensive, but still have T5/W4/4++ save.
I like to see Daemonic gaze on Princes. Sometime is better to use DG+BoT, sometime is better BoT+BoC.

At 2500 Points, dropping a DP is not a good idea. For the points, they are one of the best units we have. There is only 2 ways to run a DP, 1st (DP with MOT, Bolt and Gaze taking full advantage of the BS 5), 2nd (DP with MON, wings, Unholy Might, Iron Hide, Cloud, Noxious Touch with optional BOC). MOT on a DP is to help increase his shooting ability by giving him access to Bolt yet you’ve given him a template weapon which doesn’t take advantage of his High BS. A +4 inv save is nice, but for 215 point he could have all of what the 2nd DP listed above has minus the BOC. A +3 armor save with a +5 inv save would go a lot further then the plus +4 inv plus he would be amazing in close combat. I would highly rethink your DP setup. If you want to make your DP more aggressive then go with the 2nd DP option above. He is a killing machine.

To work them into your 2500 point list, here is a few ideas.

On a final note, I've watch most of your battle reports you've posted and I don't understand why you've rethinking your proven list. Stick with what you know. You know how to play your gun tooting Daemon Princes better then most. Why fix which isn't broken.

Cause he doesn't know how to leave well enough alone.

Why are you not playing daemons? I feel like this is going to be the Eldar disaster again.

Meh. You need a way to get more scoring units. Scenario 2 and more than liekly 3 will greatly favor numbers over firepower.

Try this list with Pedro Kantor making the Stern Guard scoring(so with Combat Squading, u get 16 scoring units and Stubborn army-wide, with an orbital bombardment as well, and a few extra attacks):

Which column calculates how much gas money you owe your mother for picking you up from the nerd shack? And...retort.